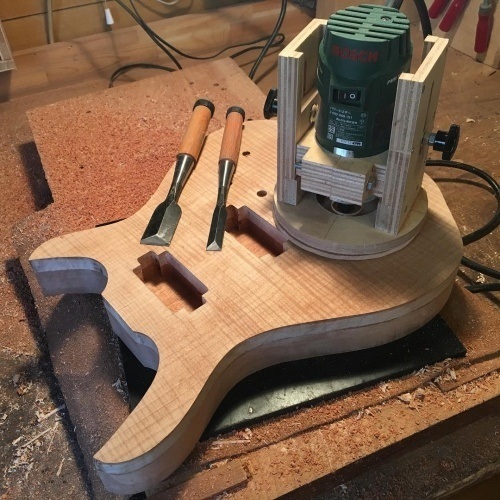 Plunge Router vs Fixed Base Router

​Woodworking is a task that takes a good amount of work and dedication but the results that you can get from it are incredible, especially when you have the right materials.

There are quite a few things that you will want to look for and make sure that you have when you first begin getting into woodworking. One of these things is going to be a router.

The router is one of the first tools that people will use in a woodworking environment and it is one that will be used even well after you have first learned woodworking.

Routers are an incredibly versatile tool, making it all the more important that you invest your money in a router that will best serve your purposes.

Plunge Router vs Fixed Base Router

There are two main types of routers that you will be looking at as you delve deeper into the world of woodworking: plunge routers and fixed base routers. Each router has its benefits and drawbacks over the other, which makes it even more important for you to understand what makes each router different from each other.

What Is a Plunge Router?

Before you can decide whether a plunge router or a fixed base router is better for your needs, you will first need to understand what exactly each router is. The plunge router is a router that can be a little bit complex at first but once you have gotten used to it, it will be incredibly easy to use.

This gives you more control over the router, offering a smooth experience and the ability to cut a little bit better. Some people worry about the plunge router not being able to handle edge-working but as long as you use the router properly, you will be able to use it with ease.

What Is a Fixed Base Router?

These routers, as the name might suggest, are routers that have a fixed base rather than one you move up and down into the wood.

Generally, these routers are going to be what you encounter most in a professional woodworking shop so it doesn’t hurt to get used to using one even if you are more interested in a plunge router.

Fixed base routers are also easier for newer users to use as you don’t have to worry about manually adjusting much. Once you place the router where it needs to be, it is physically locked onto the place and it is completely set.

The ​router bit won’t be moving anywhere and you are free to move the wood as you please. Because of this, you will be able to cut with much more precision than you otherwise would be able to.

This router is best for people who do precision work or are new to the woodworking scene. Both this and the plunge router have their specific benefits and drawbacks, though.

Where Does the Plunge Router Excel?

These routers also provide you with far more control when you have to move vertically than any other router would. Plunge routers offer you more versatility and mobility than a router that can only stay in one place, making them wonderful for people who need to work with varying depths of cuts.

Where Does the Plunge Router Fall Short?

Plunge routers also tend to be much more expensive than their fixed base counterparts. Of course, anything that provides as much versatility as the plunge router is going to be pricier, which is unfortunate.

Plunge routers are also not the best routers for people who are new to woodworking as a whole as they depend on your knowledge of cutting and depth. You also have to move them onto the material that you want to cut. You cannot use a base for them, which can be troublesome at times.

Plunge routers should really only be used by experienced woodworkers who are willing to move the router every time that something needs to be cut and who have the money to pay for the expensive router.

Where Does the Fixed Base Router Excel?

Fixed base routers are absolutely wonderful for people who might not be as well versed in woodworking. Considering the fact that this router is not a particularly large power tool nor does it involve a lot of materials, it is one of the best introductions to the machinery involved in woodworking.

You can also use these routers to properly shape the edges of the wood as you need, which is something that the plunge router cannot do nearly as well. Fixed base routers are also light and easy to maneuver, especially if you have a table base to mount them on. These routers provide you with the precision that you need without requiring years of woodworking experience to use.

Where Does the Fixed Base Router Fall Short?

Fixed base routers, unfortunately, do not offer the same type of versatility that plunge routers do. If you need to do work that requires you to maneuver the router in a variety of ways, the fixed base router might not be the best choice for you.

Which Router Is Better?

Determining which router is better depends on what you need to use the router for and your experience in woodworking. If you are new to the woodworking scene and are trying to get the best possible equipment, you might want to wait a bit before you invest the money in the plunge router as it can be difficult for novices to easily use. However, if you have the experience and need to work on a piece of wood with varying depths, then this is the router for you.

On the other hand, if you are looking for a router that can cut wood easily and can be used by people who are new to woodworking, then you might want to look at the fixed base router. This router, while not as versatile as a plunge router, can easily get the job done and is the perfect introduction to woodworking tools. 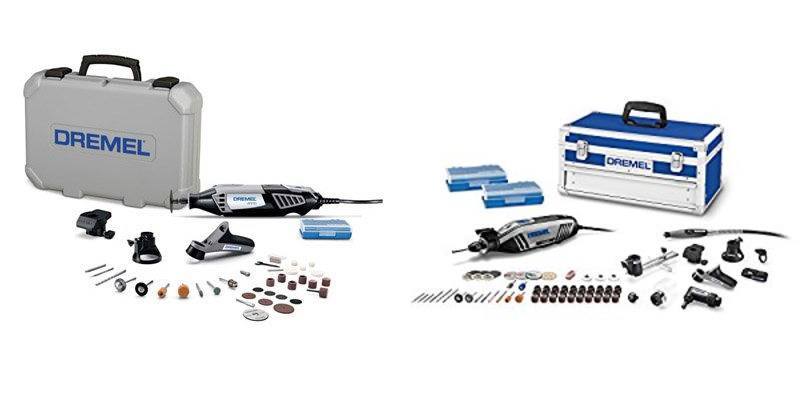 ​Having the right toolkit for your job is one of the most important things that you will want to think about. After all, you won’t be able to get your job done in a quick and timely manner if you do not have tools that allow you to work to your maximum potential.

In the world of crafts, hobbies, and work, there are thousands, probably even more than that, of rotary toolkits that you can choose from to get the job done. Out of these thousands of toolkits, some of the most well-rounded toolkits are the Dremel 4000 and the Dremel 4300. However, you might feel at a loss if you try to decide which one is better suited to your job and what you need to do.

Both the Dremel 4000 and 4300 are rotary tools that excel in versatility and usability. Just about anyone who has a basic knowledge of rotary tools will be able to pick one of these up and begin working on a project.

This is important as nobody wants to waste too much time trying to figure out the intricacies of each and every little part of the tool.

Both of these tools also come with a number of attachments, which drastically increases the range of work they can accomplish.

From tools that can help with cutting and shaping to tools that will help with polishing a metal surface, you will find that you will be able to get just about any job done with the right attachment on your Dremel 4000 or 4300.

With all that being said, it is important to note that while there are many similarities between these models, they are not the same model. This means that there are going to be differences and this also means that there will be one model that is better suited to get the job done than the other.

What Are the Specifications of the Tools?

The Dremel 4000 and 4300 are somewhat similar in a lot of aspects but in some ways, they are significantly different. For instance, the Dremel 4000 is a rotary tool with the potential for countless attachments.

The Dremel 4300, on the other hand, is only the tool. This limits some of its potential. However, it does make it significantly lighter, coming in at just over one pound versus the Dremel 4000’s nearly five pounds.

Both tools are well known for their versatility and ability to work in almost every setting that you can imagine.

Where Are These Tools the Same?

As you might be able to tell by the model numbers, these tools share quite a bit of the same features, considering that they are both from Dremel’s 4000 line. Both tools have strong motors and are designed to be comfortable and ergonomic.

Their speeds range from 5000 rpm to at least 32,000 rpm. Depending on where you purchase them, there is also a very good chance that you will be able to get a two-year warranty on both of these tools as well.

And, finally, both of these tools are famous for their versatility.
However, as you know, different models are going to have different features and these Dremel tools are no exception.

Where Do These Tools Differ?

While there are many similarities between these two tools, there are also many differences as well. For instance, the Dremel 4000 tends to be much noisier than the Dremel 4300, which is something that many people are not a fan of.

This means that if you have the Dremel 4300, you might have to spend more money getting accessories that fit the tool. Speaking of accessories, though, the Dremel 4300 comes with a light that can illuminate the area; unfortunately, the Dremel 4000 doesn’t, which can be inconvenient at times.

The final point to note is that the Dremel 4000 is also cheaper than the 4300. The Dremel 4000 can sometimes get too hot too quickly, which is something to look out for if you are planning to use it for long periods of time. The case for the 4300, on the other hand, tends to be bulky and hard to carry, which can be problematic when you need to move it around.

Which Tool Is Better?

Both the Dremel 4000 and the Dremel 4300 are capable, versatile tools made by an industry leader. Of course, this means that you can expect both of these tools to stand up and have a number of benefits on their own and they do.

Both of these tools have a number of accessories and attachments that can widen their potential to take care of everything that you need to do for your work or your hobby. With this being said, the 4000 simply has more capabilities than the 4300.

From the number of compatible accessories to the cheaper price, the Dremel 4000 gets you more of what you need when you are looking for a rotary tool than the 4300 does.

The Dremel 4300 is still a very capable tool and it even surpasses the Dremel 4000 in some ways, such as being quieter than it and having a light for illumination; however, in terms of overall capability and versatility, the Dremel 4000 is the tool that you will want to focus on for your work.